a huge thank you to the 138 pledgers who helped urbn vino achieve its  first crowdfunding goal in 2016!
Show me the PledgeMe URBN VINO crowdfunding campaign (& video!) 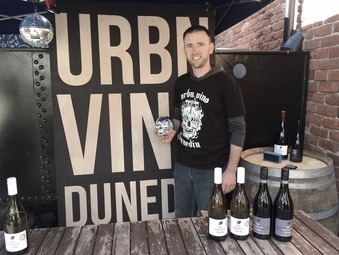 Harvest in the city in 2016 was a great success. It got people fascinated and involved, and was a tremendous amount of fun. The next stage of the URBN VINO Project is to do it all over again, but bigger, better and brighter. So I created a PledgeMe crowdfunding campaign to release some wine in advance and raise enough capital to bring the urban winery back in 2017.
​
​For those of you who don't know, PledgeMe is a brilliant and easy to use platform that gets enthusiastic people involved in funding projects, both large and small. In exchange, the projects offer some exceptional rewards. The PledgeMe website is worth a look even if you aren't interested in helping build this winery, because I promise there will be some other project that intrigues you. It is a fantastic concept and the PledgeMe team are a friendly, creative, enthusiastic and immensely clever bunch.
​
And it worked!! Thanks to all the friends, family and complete strangers who contributed to help URBN VINO reach its $20 000 goal with a week to spare! Now I have the capital to purchase fruit and barrels and to bring winemaking back to the city of Dunedin.
​
A big thank you to all those who joined up as Foundation Members of URBN VINO and to those who purchased personalised Magnums of Pinot Noir in advance. To those who purchased wine for immediate delivery and to those who trusted enough to purchase cases of Reserve Pinot Noir in advance, thank you too. People who bought wine barrels, people who joined up as winemaking apprentices, people who loved the T-shirts, people who simply emailed me to say the idea was great, thank you as well! All of you are part of this project now.

Thanks for helping make this happen. I'm looking forward to showing all of you around the new Dunedin city winery.